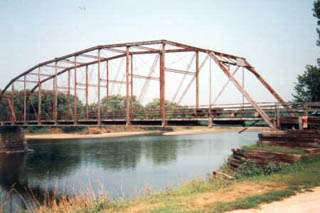 The massive iron bridge, listed on the National Register of Historic Places, was constructed in 1898 at the crossing of Sutliff's ferry, operated by Allan C. Sutliff. History has it that a sandbar formed in the river which eventually made the ferry unworkable. This caused a great deal of inconvenience for locals who would then have to travel many miles to the next crossing in order to get to the county seat in Iowa City.

In 1897 the contract for the bridge was awarded to J. R. Sheely & Co. of Des Moines, Iowa. The winning bid was a whopping $12,000.00 The bridge was completed and accepted by Johnson County in April of 1898, with dedication on June 3rd.

This was the first bridge to cross the Cedar at this location and proved an effective replacement of the Ferry service. The structure is a 827' x 16' 8" span wood trestle with a 27' x 16' east approach.Upon its retirement in 1984, it was one of only a few remaining Parker trusses known in existence in Iowa. It is one of the longest, if not the longest, Parker trusses in the state. The Sutliff Bridge Authority (SBA) leased the bridge from the state in 1984. Construction of the new Sutliff bridge, known as the Cilek bridge, was completed in the fall of 1983. The old bridge now offers its visitors a one of a kind view of the fast flowing Cedar river as well as a nice place to sit and visit with friends and family alike.

On September 11, 1999, the Sutliff bridge with its three arching steel spands over the Cedar river received its due recognition when the Johnson County Iowa Board of Supervisors placed the 102 year old structure on the National Registry of Historic Places.

County representatives presented the certificate, commemorating the historic nature of the bridge, to the members of the Sutliff Bridge Authority. It's years of service to Sutliff natives and others was recognized with a plaque which is now proudly displayed in Baxa's Sutliff Store and Tavern.

You can donate $50 (or more if you would like) to pay for replacement planks, which also gets your name on a wall of honor inside the bar.