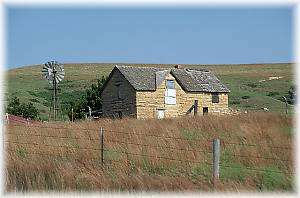 (According to Anselm Sramek's Historical Map)

A. BONE HILL - 11 miles north of McDonald. At one time many fossil bones were found at this site in the side of a bank in a draw of the East Burntwood Creek.

B. GIANT COTTONWOOD TREES - In Flanagan Draw, 33 miles south-southwest of Atwood. There are more than fifty trees that are three to five and a half feet in diameter and many smaller trees of several varieties.

C. CHEYENNE HOLE INDIAN BATTLE SITE - At this site, 12˝ miles south and 3 miles east to Atwood, a group of Cheyenne Indians (numbering from 75 to 200) were encamped on the Sappa Creek, when the U.S. Cavalry, under Lt. Austin Henley, jumped them and a fierce battle took place. Only one Indian escaped and another could have but chose to return to his family and died fighting.

D. PAWNEE GROVE - About 23 miles southeast of Atwood, where Indians used to gather and hold their meetings.

E. INDIAN BLUFF - Indian Braves stood guard on this bluff while the squaws washed and bathed in he waters of Middle Beaver Creek below. Two miles southwest of Blakeman.

F. BEARDSLEY METEORITE FALL - Section 1-3-35 is about the center of a fall of meteorites that fell in 1929. In all, over 60 pieces were recovered totaling 39 pounds.

G. KANSAS HISTORICAL MARKER - On the south shore of Lake Atwood is a large marker commemorating Frontier Days in Rawlins County, and the 1859 trip of Horace Greeley through Rawlins County.

J. CAVE DUG IN SOLID ROCK - It is believed that a rider for Belle Starr, called Capps, used the cave as a hide-out after Belle Starr was released from jail where Capps testimony helped to put her for horse stealing. It is located 3 miles east-southeast of Achilles.

K. INDIAN BOY MONUMENT - 4 miles east of Ludell, Kansas. After the Indian raid in 1878, the Indians killed many cattle in the canyon to the south, what is now known as Hundred Head Draw. When the Indians pulled out they left behind and injured Indian boy who was later killed by Abbott and Harney. Monument erected by C.B.&Q. Railroad in 1900.

L. NATIVE STONE BUILDING - About 1 mile northeast of Ludell. In 1898 this building was used as a cheese factory by Henry Obert. Later it was used as a home by the Hoste family until a better home was built.

O. CAVE DUG IN SOLID ROCK - Located one mile south of Dewey Ranch Headquarters, in southwest Rawlins County. Supposed to have been dug by Jim O'Neil for his family, until better living quarters could be provided. He was also rider for the Dewey's from about 1890 to 1903.

P. GIANT COTTONWOOD TREE - One mile southwest of Ludell, this tree, 6˝ feet in diameter, is located 300 yards east of the old Texas to Ogallala Cattle Trail Crossing. Tree has two large steel spikes driven in the trunk on the west side.

Q. MULE CAVE - DUG IN SOLID ROCK - Made by a settler for his small team of mules because he was fond of them and took good care of them. It is located 4 miles south, 1˝ miles east of Achilles.

S. STEVENS (STONE) CHURCH - Begun in 1892, by J.R. Stevens at the inspiration of his wife, "Aunt" Jennie Stevens that the chapel came into existence. Uncle Dick Stevens sold a barrel of Sorghum Molasses, then with the proceeds bought food for the settler workers who donated their labor. Thus a chapel was erected y donated labor and on five acres of land given by J.R. Stevens and with financial help form friends in Illinois. The first service to be held in chapel was the funeral of Uncle Dick, when only the walls were up and the roof on.

T. SITE OF STATION NO. 17 - This was one of the stations used by the Pikes Peak EXpress stagecoach on the trial from Leavenworth, Kansas to Denver and Pikes Peak area. In June 1859, the coach upset near Station NO. 17 - passenger was Horace Greeley, who was treated at the station. This spot is only 1/2 mile southwest of Ludell.

U. MINOR SOD HOUSE - Bought by Mr. and Mrs. T.J. Minor form a man named Graves. It has been restored and refurnished. It was built before 1909, and is in the extreme southwest corner of Rawlins County.

W. HAND DUG WELL - Stone-lined with native stone and still in use in 1969, on South Beaver Creek, in southwest Rawlins County.

X. FOSSIL DRAW - In the early 1900's an Eastern University explored this draw and removed many fossil turtle shells for museums in the east. It is 8 miles southwest of Atwood near the Beaver Creek Valley.

Y. OAK RANCH - As it was known from 1903 to 1906 was headquarters of the Deweys. There existed a feud between the Deweys and the Berrys (who lived just on the edge of Cheyenne County) which culminated in open warfare between the two factions over on the Berry Ranch on June 3, 1903.

Z. SITE OF BELLE STARR'S DUGOUT- This was the hideout of Belle Starr during her days of horse stealing in Rawlins County. It is located one mile east of Achilles in the hills south of Sappa Creek.

SITE OF THE LARGEST HAND-DUG WELL IN RAWLINS COUNTY - Excavated by the C.B.& Q Railroad about 1888, just 100 feet west of the depot at McDonald, Kansas, it was dug to a depth of 208 feet and a diameter of 16 feet and lined with native stone. The railroad was built through the County in 1887 and 1888. The well is filled in now.


Come visit us in Atwood, Kansas

Lake Atwood is a beautiful 43

The Buffalo Statue is located in front of the courthouse and was presented to the city by local sculptor, Pete Felton, renowned Kansas artist.

This outdoor artwork is painted on the west side of the building at 4th and State Street, by H-D Productions, 1997.

The renovated Atwood Depot is now a gift and collectibles store that sits at the edge of Lake Atwood.

The Rawlins County Courthouse was built in 1906 and exemplifies Greco-roman architecture.

To Atwood calendar of events

Things to do Tours near Atwood, KS