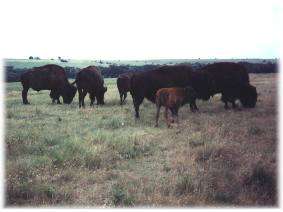 A herd of buffalo may be seen grazing contentedly near Beloit, Ks. The herd of 27 started in March 1978 by Larry, Jr. has now been increased to over 300 head. The Butterfield's opened a retail outlet store in 1979 selling buffalo meat locally and now ship nationwide. Buffalo meat is known for its low cholesterol, low calories and very high protein content.


Address: Part of their buffalo herd may be seen 3 miles west & 2 miles north of Hwy # 24 and K-14 Junction.
They request only vehicle viewing.

We currently do not have any events for Beloit, Kansas in our database. If you know of events taking place, please add the event
.

Things to do Buffalo Herds near Beloit, KS