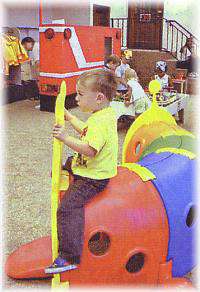 The York Area Children's Museum has a multitude of reality-based
displays that bring out children's fantasies based on the fun side of
adult realism.


Area youngsters thoroughly enjoy playing and learning in its many
exhibits, including the block area, a large grocery store, replicas of a
bank, travel agency, ambulance and semi-truck, the dress-up area
with large mirrors and lots of costumes, the puppet stage, the science
room, and much, more.

Things to do Museums near York, NE