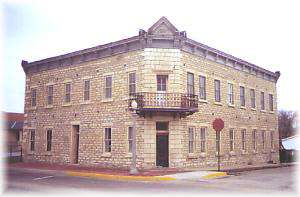 Built in the late 1800s, this hotel was originally known as the Brandt Hotel. This hotel sheltered the railroad crews and almost every hotel service for travelers during the years. At one time the hotel was refurbished with old furnishings to make it a pleasant and quaint place to eat. The current owner is now in the process of refurbishing it again to be operated as a bed and breakfast.

Originally there were three frame buildings at this location. The first one housed a cigar factory, the second a barber shop ...