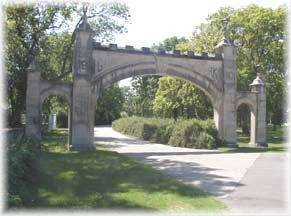 Gage Park is one of the biggest attractions in Topeka. Within the park itself, the biggest attraction is the Topeka Zoo, which allows visitors to come face to face with gorillas in a special Gorilla Encounter exhibit. Other features at the zoo include a bush camp with a lion's pride, a walk-through tropical rain forest, and a children's zoo.

Gage Park has other attractions, including a carousel that is one of the fewer than 200 original American carousels still in operation. The park's mini-train has been operating for more than 30 years. The Reinisch Rose Garden is an unexpected visual treat with more than 400 varieties of roses, totaling more than 6,500 bushes.

Other features include band concerts in the park and the Bathhouse Plays, produced by the city's only year-round theatrical production company for youth ages 14 through 18.

Come visit us in Topeka, Kansas

This historic Union Pacific depot has been restored to its 1927

The French-Norman style house which was built by Frank P. MacLennan in 1928, is home to the governor of Kansas. It is the focal point of a 200-acre estate overlooking the Kansas river. Listed on the National Register of Historic Places, the estate features several ponds and hiking trails.

Things to do Recreation near Topeka, KS

The "Friends of the Prairie Spirit" welcome you to the first major rail-trail devel...

Camp Chippewa is a church camp and retreat center with cabins and kitchenettes. Participate in horseback riding, canoeing, sw...