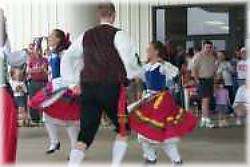 The Italian Festival of McAlester, Oklahoma (USA), has been one of the finest annual events in Oklahoma since its inception in 1971. Held on Saturday and Sunday of Memorial Day Weekend, the Festival draws thousands of visitors to the fairgrounds of the Pittsburg County Expo Center for the two-day event. Join the many thousands who enjoy delicious Italian Food in the Food Tent and the Sandwich Tent, a variety of other foods from dozens of concessionaires, live entertainment for all ages, shopping among the hundreds of vendors, craft show booths and fine arts booths.

Don't miss the most exciting weekend of Spring in the rolling hills of beautiful southeastern Oklahoma - only a pleasant May drive from Tulsa or Oklahoma City in Oklahoma, Fort Smith or Little Rock in Arkansas, Dallas or Fort Worth in Texas! Come join the fun as we celebrate and honour the living heritage of the many Italian families of the McAlester area in the heartland of America - you'll be glad you did!

The Festival takes place each year at the county fairgrounds - the Pittsburg County Regional Exposition Center, which is located on the south side of U.S. 270 highway, about 4 miles west of McAlester. The entire complex of buildings and structures (and tents during the Festival!) is easily visible from the highway. The McAlester exit from Indian Nations Turnpike is less than a mile west of the fairgrounds. Sat 9am-7pm, Sun 10am-4pm.

History of the Italian Festival

The first Italian Festival in McAlester was held in 1971. It was the idea of Krebs restaurant owner Bill Prichard. He and his family have operated the "world famous" Pete's Place in Krebs for nearly 60 years. The festival was to honor and prolong the Italian heritage in this area of Oklahoma.

The festival has grown into one of the largest festivals in the state, and features one of the largest arts and crafts shows in Oklahoma, as well as the delicious and freshly-prepared Italian food and tributes to Italian heritage. All the labor for the festival comes from volunteers. During the two-day event some twenty thousand people visit and enjoy, or take part in the festivities, which makes the efforts of the hundreds of volunteers all worthwhile.

Many Italians came from Italy, through the Ellis Island point of entry in New York, to find honest, but hard, work in the often dangerous) coal mines. As the new immigrants achieved and overcame the obstacles in their new country, some saved up enough money to bring family from Italy to join them in Oklahoma. At that time McAlester was in Indian Territory, in the part controlled by the Choctaw Nation (one of the American Indian tribes commonly referred to as "The Five Civilized Tribes") - Indian Territory and Oklahoma Territory were joined to create the brand-new State of Oklahoma in 1907. The Italian community in the McAlester area flourished and thrived and grew over the years. As the mines began to play out, the Italians in this area went into other trades and businesses, including the establishment of some of the finest Italian restaurants in America. Other nationalities were also represented in the immigrant tide that built up this region - notably Greeks and Russians in significant numbers. However, it was the Italians who marked this part of Oklahoma most indelibly and wonderfully - and that is the glorious heritage which we celebrate with The Italian Festival of McAlester.