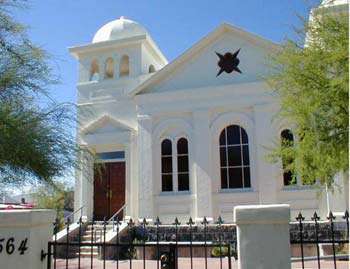 Built in 1910, the Jewish Heritage Center (Historic Stone Avenue Temple) was the first Jewish house of worship established in the Arizona Territory. It is located in the downtown area and is within the Barrio Libre National Historic Area in Tucson, Arizona. The Temple was an integral part of the religious corridor that developed along Stone Avenue between the late 1800s and the early 1900s. Built before Arizona achieved statehood, it served as an important center of Jewish community for the entire southwest.

The Jewish Heritage Center has been beautifully restored as a center for regional Jewish history and community events.

Located in the El Presidio Historic District is the little city block of Old Town Artisans. The 150 year old adobe building has 6

This beautiful oasis in the heart of Tucson was originally the home of Bernice and Rutger Porter. Dating to the 1920

Things to do Temples near Tucson, AZ