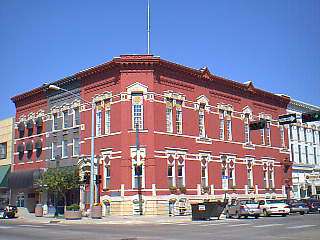 Cities and agricultural areas need capital to finance growth.
Nebraska Loan and Trust Company, organized in 1882 with James B. Heartwell as
need in Hastings by providing a means for Eastern Capitalists to invest in Nebraska
real estate mortgages. In 1883-84 they erected a large, ornate, L-shaped Victorian
Italiante structure at Second and Lincoln. The building which cost $35,000,
was designed by C.C. Rittenhouse, and has three stories at the end sections
and two stories above an elevated, rusticated stone basement, a corner section.
The stone trimmed brick walls are topped by a pressed-metal parapet. The primary
entrance was originally located in the beveled corner, above street level, and
reached by cast-iron staircases. About 1915 it was moved, along with its eclectic
stone frontispiece, to the south side of the building. One of the original cast-iron
stone fronts remains on the Lincoln Avenue side of the building. This building
was placed on the National Register of Historic Places in 1978.