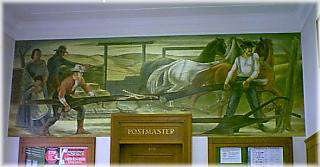 In Geneva is the Geneva United State Post Office, a one-story, five-bay Georgian Revival-style building, constructed in 1939-40. One of its walls holds one of twelve murals in Nebraska listed on the National Historic Register commissioned by the Treasury Department's Section of Fine Arts under the W.P.A. program. This project was made possible by a New Deal program in an attempt to make art accessible to the general public.

"Building a Sod House" by Edward Chavez was installed in 1941.

Things to do Arts near Geneva, NE