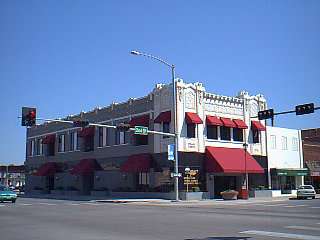 Studded in bright lights, the Strand Theatre marquee heralded
first-run showings of such movie classics as "From Here to Eternity"
and "The sound of Music." For almost seventy years the Strand was
the grand dame of motion picture entertainment in Hastings. The Strand's conception
began August 27, 1915, when William Brach commissioned famed Hastings architect
C.W. Way to draw up the plans for a two story, moving picture theatre and office
building. The exterior was finished in white enameled terra cotta, and the lobby
exuded a luminescent white emanating from beautifully tiled floors and richly
veined marble walls. The spacious interior was highlighted in old ivory and
French gray. The adornment of blue velvet stage curtains and carpeting accented
the warm oak woodwork. Seating capacity in the auditorium was seven hundred.
The Strand turned down its movie hall lights for the last time on March 30,
1984.

Adams County School District 20 was formed on September 23, 1872. Replacing sod and frame structures, the red brick schoolhouse was built in 1902

Things to do Theatres near Hastings, NE