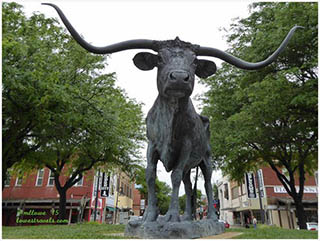 A bronze statue by Jasper D'Ambrosi commemorates the 1875 - 1885 Texas cattle drives to Dodge City. The sculpture represents longhorns who emerged as leaders and led many drives up the dusty trail from Texas. Coronado's Conquistadors introduced the longhorn, first cousin to the Spanish fighting bull, to the New World during the 1500s.