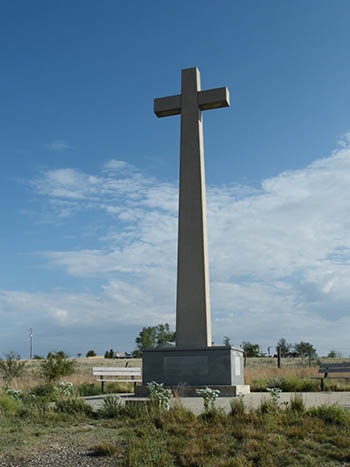 The Coronado Cross stands 38' tall, marking the spot where Francisco Vasques de Coronado, a Spanish explorer, is said to have crossed the Arkansas River in search of the fabled "Cities of Gold" in 1541.

When he arrived on June 29, 1541, a mass of thanksgiving was held on the nearby hills, the first Christian service held in the interior of the continent predating the landing fof the Pilgrim Fathers at Plymouth Rock almost 100 years.

The cross was made in Newton of pre-stressed concrete, and was erected in June, 1975. The base gives history of Coronado's Expedition and the Indians he found here.