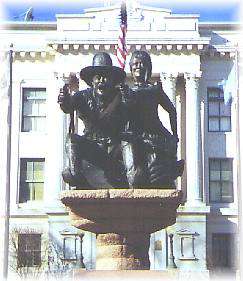 Perry and Noble County are in the heartland of that historic area, and this dedication is made on the occasion of the centennial year of the great run.

In this plaza, the sculpture symbolizes all of the hopes and dreams of our founder. It shows us only a man and a woman, whose offspring we are. The rest of the story is left to your own imagination. Who are they; where were they from; where were they going; what kind of wagon was it; what were this couple's real hopes and dreams? These details are left to your own fancy.

This we know: Those hardy pioneers brought with them a steadfast faith in God and because they did, we have a spiritual legacy that makes this a better place in which to live.

Engraved in this base are names of organizations, businesses, individuals, and good citizens whose generous support made this sculpture possible.

The entire plaza is an all-Oklahoma project. Bill Benet, the artist grew up in Perry; granite from Oklahoma provided the base; a state foundry did the bronze casting; Oklahoma paving stones cover the plaza area. The models were two young Perry residents, Stephanie Rupp and Rusty Davis."


Address: Located on the Courthouse Lawn

Things to do Arts near Perry, OK