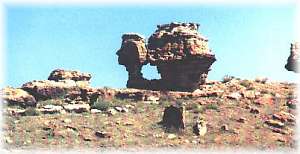 The Old Maid (above)- This rock formation resembles a human profile.

Three Sisters or Wedding Party - The minister, bride and groom on the far right.