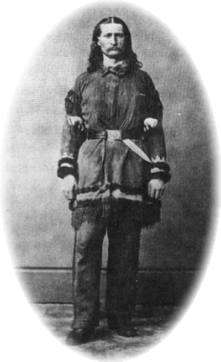 In the spring of 1859, Dave McCanles was on his way to the Colorado gold fields. He became discouraged as he met returning miners and heard their tales of disappointment. He decided to take up road ranching instead and bought Rock Creek Station. That summer and fall, he built a log cabin and dug a good well on the east side of Rock Creek. Later, he built a toll bridge across the creek, eliminating the crude rock ford. His normal fee ranged from 10 to 50 cents, depending on a person's ability to pay.

The following year, he rented the East Ranch to Russell, Majors and Waddel, owners of the Overland Stage Company and founders of the Pony Express. Rock Creek was used as a stage station, as well as a swing station where Pony Express riders could quickly change their mounts. Overland used its own men to run the station...Horace Wellman as company agent/station keeper and Dock (sic) Brink as stock tender. Early in 1861, James Butler Hickok was hired as stable hand.

Later, Overland bought the East Ranch from McCanles, apparently making a cash down payment, with the remainder in installments. The company fell behind on payments, and Wellman went to Brownville for supplies and to get the money due McCanles. He was accompanied by Monroe McCanles, David's 12-year-old son. When they returned, Monroe saw his father's horse at a neighboring ranch and went to greet him, while Wellman went on to the station. The date was July 12, 1861.

Monroe then accompanied his father and two hired men, James Woods and James Gordon, to the station to ask Wellman about the payments. At the house, McCanles was confronted by Mrs. Wellman and then by Hickok. Wellman did not come out of the cabin. After talking with Hickok, McCanles went to another door. Hickok shot him from ambush, as he entered the doorway...ironically with McCanles' own rifle. He had left the gun for Wellman to use to defend the station.

When they heard the shot, Woods and Gordon came running from the barn to the house. Hickok stepped into the doorway and wounded both men with a handgun.

Woods ran around to the north side of the house, where he fell and was killed with a grub hoe, presumably wielded by Wellman. Although wounded, Gordon tried to escape in the brush of Rock Creek but was tracked down and killed with a load of buckshot. Monroe dodged a blow from the grub hoe and escaped death by fleeing into a ravine.

Wellman, Brink and Hickok were arrested and tried for murder in Beatrice, but they were all acquitted after pleading self-defense. Monroe stoutly claimed that his father and the other two men were unarmed, but he was not allowed to testify.

No one really knows why Hickok fired the shots that began his bloody and seemingly one-sided fight. Many explanations have been offered, including romantic versions of love, hate, theft, and even the conflict between the North and the South. Probably the best known version of the story was written by Col. Ward Nichols and published in the February 1867 issue of Harpers Magazine. His story glamorized Hickok, now dubbed "Wild Bill", as a fighter frontier hero. In Nichols' account, Hickok single-handedly fought and killed 10 men with a gun and a Bowie knife, "The M'Kandlas's Gang...reckless, blood-thirsty devils who would fight as long as they had strength to pull a trigger." Although supposedly carrying 11 buckshot and 13 knife wounds, Hickok emerged the victor.

Nichols' story, along with the others by such writers as Ned Buntline and J.W. Buel, glorified Hickok to the exclusion of the facts. Hickok became a western legend, and the true story of the fight at Rock Creek Station faded from memory.

After the killings, the Pony Express rode its last ride and the East Ranch was operated as a home station for the Ben Holliday* Stage Line. The West Ranch was owned by Wolf and Hagerstien, who were also involved in Overland Trail traffic. In 1865, D.C. Jenkins set up the second post office in Jefferson County on the West Ranch and ran the toll bridge. Holliday sold his East Ranch holdings to the Wells Fargo Stage Line in 1866. Within a year, traffic on the Oregon Trail tapered off as the railroad pushed westward.

Glorified by Harpers Magazine, "Wild Bill" Hickok was addicted to cards. He was gunned down by Jack McCall at Saloon No. 10 in Deadwood, South Dakota, on August 2, 1876. He held two pair - aces and eights - the now famous "dead man's hand". He was 39 years old.

*Some historical sources spell this name as "Holladay".

Things to do Famous People near Fairbury, NE