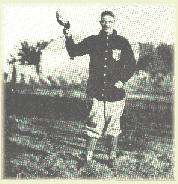 On October 24, 1913, Blue Rapids played host to the Chicago White Sox and New York Giants as they played an exhibition game while on World Tour. More than 3,000 fans sat on bleachers, hung on fences, and watched from Model T's when the teams came to town. Advance tickets sold for $1.00 and cost $1.50 at the gate.

The Blue Rapids diamond is one of the few surviving sites still in use to have fielded baseball legends Crawford, McGraw, Klem, Mathewson, Thorpe, and Weaver. Blue Rapids is also the smallest town in the U.S. to have hosted a National League baseball game.

Towns wanting to host the touring teams were required to put up a $1,000 guarantee. A group of Blue Rapids businessmen acted quickly to sell shares of stock and raise the needed money. After securing the game, a large effort was made to publicize it and sell tickets. Dozens of area banks became ticket outlets, and posters were distributed for up to 100 miles.

Blue Rapids was the seventh game on the tour. It was the only Kansas town included and the smallest among the 49 playing sites. A special train carrying the World Tour entourage arrived at the depot at 7:00 a.m. on October 24, after the teams played a game at Sioux City, Iowa, the previous day. The players were given automobile tours of the area after their arrival. At noon, the schools and most businesses closed. The townfolk and out of town visitors gathered for a parade of players and bands around the town square, and they marched down to the ball park where the game began at 2:30 p.m.

The game was won by the White Sox, 8 to 5. It was highlighted by four home runs by the Sox. The crowd, suspicious of "minor league" pitching, began chanting, "Big Six," in an attempt to get Christy "Big Six" Matthewson into the game for the Giants. But Matthewson was used sparingly on the tour and did not pitch that day.

After leaving Blue Rapids, the players traveled on through the Southwest and up the Pacific coast to Vancouver, British Columbia, where they sailed to Japan. They continued their series along the Pacific Rim, to Ceylon and India, and through the Suez Canal to Egypt. They wound up with several games in Europe, the last and most exciting being played in front of King George V in England. The teams arrived back in New York on March 6, 1914, sailing on the Lustania, which was later to play a role in the United States' entry into World War I.

In 1939, the Kansas City Monarchs played on this field during the Marshall County Fair. Buck O'Neal was among the Monarch players. In the early 1950s, Earl Woods, father of professional golfer, Tiger Woods, played for a local town team. Earl Woods was one of the first black athletes to play in the Big 7 (now Big 12 Conference) while playing at Kansas State Agricultural College.

Things to do Historic Sites near Blue Rapids, KS