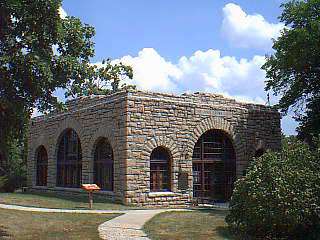 The territorial log cabin, which now houses the John Brown Museum, was built in 1854 as the home of Reverend Samuel L. and Florella (John Brown's half sister) Adair. The home was frequented by Brown during his several journeys to Kansas between 1855 and 1858.

The Adairs shared John Brown's staunch abolitionist beliefs. They had come to Kansas Territory from Ohio with the intention of being missionaries to free-state settlers, but the Adairs were unable to build a stable congregation during the territorial peroid.

What settlers there were, lived in scattered localities; and what roads existed, were largely impassable during inclement weather. It was not until July 1861 that a church was finally constructed for Adair's congregation, and that did not become a reality without funds from Eastern philanthropists and donations from Ohio. Now known as the Old Stone Church in Osawatomie, its placid limestone facade belies the difficulties its founders went through to build it.

Problems with the mission work did not lessen once the church had been constructed. Adair's stipend as missionary was cut off during the Civil War, and since his Osawatomie parishioners were too few and too poor to support a minister, he sought work as a military chaplain, first at Fort Scott and later at Fort Leavenworth.

The cabin remained the home of Florella and Samuel Adair until their deaths in 1865 and 1898, respectively. In 1912 the cabin was dismantled, moved from its original site northwest of the present city of Osawatomie, and reconstructed in what is now the John Brown Memorial Park. Today the interior of the cabin is much as it was when it was the Adair family home and stopping place for John Brown. Many peices of the original furniture are in the cabin's front room and the melodeon played at Brown's funeral is on display.

The State Historic Site has reopened after a recent arson fire and the cabin is protected in the pergola that also houses the museum exhibits and interpretations.

Things to do Museums near Osawatomie, KS