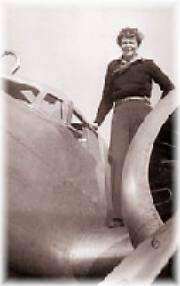 Despite a few privileged years living with her grandparents in Atchison, Kansas, Amelia Earhart's childhood years were fairly transitional. Her father's job took him to Des Moines, where the family joined him a few years later. In 1913 they moved to St. Paul, Minnesota, where times were hard for the family. A year later, Amelia, her mother and sister, moved to Chicago and Amelia finished school at Hyde Park High School. Amelia began college at Ogontz School in Rydal, Pennsylvania, but during Christmas vacation in 1917, she visited her sister Muriel at St. Margaret's College in Toronto. World War I had begun and Amelia saw the returning wounded, she was greatly touched by their need for help. She took a first aid course and worked as a nurses aide at Spadina Military Hospital. During her spare time she watched airplanes take off from a nearby airfield.


After the war, Amelia enrolled as a pre-med student at Columbia University in New York. During summer vacation, she visited her parents in Los Angeles. After her first airplane ride there, she was determined to learn to fly. She drove a truck and worked at the telephone company to earn the $1,000 for lessons. Neta Snook taught her to fly at an airfield on the outskirts of town, reached by taking the bus to the end of the line and walking four miles. Her first solo flight was in 1921.


On her 25th birthday, with the financial help of her mother and sister, Amelia brought her first airplane, a bright yellow Kinner Canary. In October, 1922, she invited her family to an air meet at Rogers Air Field in Los Angeles, where she set the women's altitude record of 14,000 feet.


In 1924, Amelia's parents divorced. Amelia sold the Canary and bought a yellow Kissel "Goldburg" roadster in which she drove her mother to Connecticut to live with Muriel and her family. Amelia took a job at Massachusetts University Extension Program instructing foreign students in English. She supplemented her income working at Boston's Denison House, which helped children from Ireland, Syria and China adjust to life in the United States.


Until 1928, no woman had crossed the Atlantic by airplane. Having established herself as an avid flyer, Amelia was selected as "an American girl of the right image" to complete the "Friendship" flight between America and Great Britain. With Wilmer Stutz as pilot and Lou Gordon as mechanic, the "Friendship" arrived in Wales on June 18, 1928 and Amelia Earhart became the first woman to cross the Atlantic.


Amelia was embarrassed when the public began to call her "Lady Lindy." She felt it inappropriate because, in her words, she had only been "baggage" and had not piloted the plane.


Amelia spent the rest of 1928 and 1929 touring, lecturing and writing "20 HRS. 40 MIN., Our Flight in the Frienship." She accepted a job writing a column for Cosmopolitan magazine and bought a Lockheed Vega. With this plane, she entered the Women's Air Derby, the first formal competition for women and dubbed the "Powder Puff Derby" by male pilots. She placed third in this eight-day flight from Santa Monica, California, to Cleveland, Ohio, because Ruth Nichols crashed on the last day out and Amelia stayed behind to see if Ruth was alright.


In 1929, Amelia met with a group of other women pilots in a hangar at Curtiss Field on Long Island. They formed an organization of women pilots and named themselves The Ninety-Nines because there were 99 charter members (out of the 117 licensed women pilots flying in the U.S.). Amelia was elected their first president.


Since the "Friendship" flight, Amelia had been acquainted with publisher and promoter George Palmer Putnam. Putnam proposed marriage to Amelia six times before she finally agreed to marry him. They were married February 7, 1931 and lived on his estate at Rye, N.Y. Amelia was committed to flying and made certain prior to the wedding that "GP" understood she would not be a traditional housewife and mother.


Amelia went on to set numerous altitude, speed and distance records. On April 8, 1931 she set an altitude record of 14,000 feet in an autogiro. On May 21, 1932, four years after the "Friendship" flight, she flew the Atlantic alone in her Lockheed Vega, which had been altered to hold more fuel and give less wind resistance. The windshield had been removed and her only visibility was through two small side windows. She carried a thermos of hot soup and a can of tomato juice. She encountered lightning, rain, instrument failure, ice on the wings and fuel leaking into the cockpit before, 15 hours and 18 minutes after takeoff, she landed in a farmer's field on the coast of Ireland. Many honors were bestowed on Amelia after this flight. President Herbert Hoover presented her with the National Geographic Gold Medal and Congress honored her as the first woman to receive the Distinguished Flying Cross. On January 1, 1935, Amelia became the first person to fly from Hawaii to California and later that year she became the first person to solo from Los Angeles to Mexico City and from Mexico City to Newark. Between 1935 and 1936, Amelia served as an aeronautical adviser and women's career counselor at Purdue University and made plans to conquer her last frontier - a 27,000-mile flight-around-the-world at the equator. After setting out from Oakland on March 17, 1937, Amelia's first attempt to fly around the world ended in a runway crash in Honolulu that set back the project several months and caused reorganization. On June 1, 1937, she set out again from Miami, Florida, with only Fred Noonan as navigator. The new route included stops in Brazil, Africa, Karachi, Burma, Singapore, Australia, New Guinea, Howland Island and Hawaii before ending in California. On July 2, on what was nearly the last leg of her historic flight, she took off from New Guinea for Howland Island, a tiny island in the South Pacific. There would be no landmarks for the 2,566 miles and no radio contact after 500 miles. A trailing, 250-foot wire antenna had been removed because it was awkward to reel out and in while flying. This meant the plane would be out of radio contact for two to three hours over the Pacific until they reached Itasca, a ship stationed near Howland Island.


On July 2 the world was listening and the crew aboard the Itasca watched the sky. At 7:42 a.m., the radioman aboard the Itasca heard Amelia broadcast, "We must be on you but cannot see you and fuel is running low. Been unable to reach you by radio. We are flying at altitude 1,000 feet." Amelia's last communication was heard at 8:45 a.m., "We are running north and south." The most extensive search ever made for civilians at sea was unable to locate any trace of Amelia and Noonan, their plane or its wreckage.


Come visit us in Atchison, Kansas

This 25-room mansion, listed in the National Register of Historic Places , is a glorious example of the opulence of the Victorian era. Built in 1882

This charming limestone building was completed in 1868 according to plans of Richard Upjohn, who also designed Trinity Church on New York's Wall Street. The interior has beams and pews of native black walnut and lovely stained-glass windows. Listed on the National Register of Historic Places

At Warnock Lake you'll enjoy fishing, swimming, canoeing, picnics and games, and a shelter house and restrooms. Camper hookups and concrete pads are available for $2.00 per camper.

Benedictine monks established St. Benedict's Abbey in the late 1850s. Today about 40 monks reside at the abbey on the northern edge of Benedictine College. The historic complex is listed in the National Register of Historic Places. The Gothic-style abbey, completed in 1929

To Atchison calendar of events

Things to do Famous People near Atchison, KS