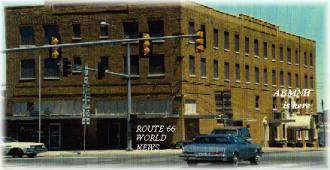 The Anadarko Basin Museum of Natural History is located in the old Casa Grande Hotel, which was headquarters for the US Highway 66 Association National Convention on April 27, 1931. Two hundred twenty-five delegates attended the convention and 30,000 people came to watch the parade and rodeo which followed. A live buffalo was killed and served for a banquet that followed.

Listed on the National Register of Historic Places, the hotel was built in the late 1920's and promoted as the only fireproof hotel between Oklahoma City and Amarillo. It is also site of one of the world's largest drilling rigs, 181 feet tall, and visible from Interstate 40. It also houses the Route 66 World News, a publication promoting the history and preservation of the nostalgia of the "Mainstreet of America."

The regional nature of the museum encompasses a large, natural geologic wonder known as the Anadarko Basin. This basin covers most of the area roughly bounded by Oklahoma City, Anadarko, Amarillo, Guymon, Dodge City, and Blackwell. Some of the deepest natural-gas wells on Earth have been in the Anadarko Basin. Many hours of labor and the efforts of numerous individuals went into the rehabilitation of the mezzanine.

The Flying W Ranch has RV hookups available for 10 vehicles near the lake. This area has a convenient shower house. Kids and adults alike will enjoy the variety of critters around the farm, including goats, lots of beautiful riding horses, cattle, buffalo. It'

Things to do Museums near Elk City, OK

The sons of Dr. Marlow were accused of stealing cattle from drovers on the Chisholm Trail. Some say the boys were wrongfully ...