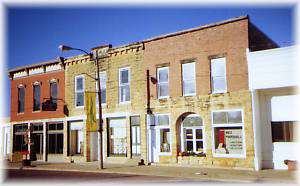 The Grassroots Art Center has been open since 1995 and occupies three turn-of-the century native limestone buildings on the Main Street of Lucas.

The main building was a bank until the bank holiday in 1933; it did not re-open as a bank but became the town's post office; the upper floor was used as a Masonic lodge, a use reflected in the emblem carved in the capstone as well as an etched window. The old vault of the bank remains intact in the center gallery.

The north building was originally a doctor?s office, and retains a keystone carved with the physician?s name, Geo. Eye, 1887; it later was used as a drugstore, pool hall, and truck repair shop.

The south gallery was a bakery, then a café, a dry-cleaning business, and storage facility before renovation.

The 2000-square-foot area at the back of the buildings is currently being developed as a Courtyard Gallery.

A wall featuring elements of the distinctive postrock architecture of the area will complement the limestone buildings as well as tell the story of postrock culture for travelers on KDOT's Postrock Scenic Byway on Highway 232 between Wilson and Lucas.

Things to do Historic Buildings near Lucas, KS