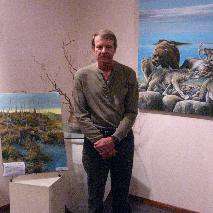 This exhibit will showcase Andresen's work in acrylic, oil and watercolor and include his large canvases of arctic and subarctic wildlife. Andresen's Memorial Exhibit will be held at the Clinton Art Association's River Arts Center, 229 Fifth Avenue South, Clinton Iowa. The Gallery is open Wednesdays through Sundays from 1:00 pm to 4:00 pm.

Lyle Andresen's sudden and disquieting death on January 16th came as a shock to not only his family and friends, but the Art Community as well. Ironically, he passed as he was preparing to transport his works for his exhibit at the Clinton Art Association's Gallery at the River Arts Center, to have begun January 18th. The Clinton Art Association is grateful to the Andresen Family for the opportunity to move forward with Lyle's exhibit. We are honored to be able to provide this Artist Memorial for the family, the art community and the public as a means of tribute to Lyle's lifetime work.

Lyle's art career started early in life, during his high school years. Beginning as a pencil and sketch artist, he was mentored by a special art teacher, Mrs. O'Neal, who encouraged him to expand his creative horizons through acrylic painting. This effort was understandably challenging to Lyle, who's familiarity with pencil was a world away from dealing with the new aspects of acrylic - color hue, saturation, interplay, as well as fluidity, opacity and layering. The more mundane tasks of canvas stretching and preparation seemed a step removed from 'art' for the young man.

After the limited effort of just a couple paintings, Lyle informed Mrs. O'Neal, his high school art teacher, that he would never paint again! Firmly encouraging him, she told him that if he stuck with it, he would become better and more comfortable, and she was sure he would come to love it. As he persisted, his abilities grew, as he worked with different painting mediums. It wasn't really until Lyle discovered Bill Alexander (who developed the "Magic Method" of painting with a "mighty brush" later used by Bill Ross) that painting 'clicked' for Lyle - and we have his excellent art on display in this exhibit to prove that Mrs. O'Neal was, indeed, a prophet, as Lyle related the story. The Art Community is grateful he persisted in his self-described "trial and error" art education.

Lyle was a lifetime supporter of wildlife conservation groups such as National Wild Turkey Federation, Ducks Unlimited, Waterfowl USA, and Pheasants Forever. An attestation to the quality of Lyle's art, he was the featured artist for the Davenport chapter of the National Wild Turkey Federation at their annual banquet for 18 years. From that springboard, Lyle was encouraged to compete in the NWTF art contest, a win-or-lose competition. He did not win, but his entry into that contest was later sold, and netted him enough money to finance his first of several trips to Alaska and Canada, and furthered his journey toward his magnificent renditions of Arctic and sub-arctic wildlife.

Just as Lyle was artistically encouraged by others in his life, he continued to 'pay it forward' in mentoring and supporting other artists. One of these recipients of Lyle's artistic wisdom from the local area went on to compete for, and win, a Ducks Unlimited painting competition, which she largely attributes to his mentoring. His admonition to her was "Brothers of the Brush Unite!" - to foster whenever possible interest, education, and experience of art in others, regardless of age, medium, or experience.

This event is open and free to the public. Please join us to honor Lyle Andresen's life work. Call 563-243-3300 for more information, or visit www.clintonartassociation.com.

To Clinton calendar of events

Things to do near Clinton, IA