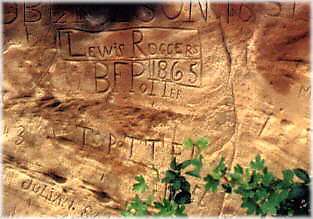 Autograph Rock contains hundreds of carved signatures of Santa Fe travelers and others dating as early as 1826. Autograph Rock is a 200 yard long rock cliff about 20-25 feet high. There are over 323 names on the rock itself and 500 plus names in the immediate area. Most of the signatures were carved during the peak of the Santa Fe Trail during the middle 1800's. One popular name is F.B. Delgado who was a noted freight merchant from Santa Fe.

Some famous names known to Santa Fe Trail fans have fallen to the weathering and are barely recognizable.

NOTE: Autograph Rock is located on posted private property and is not accessible by the public. Special viewing tours may be arranged through the Cimarron County Chamber of Commerce. (580) 544-3344