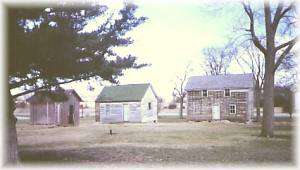 
When the Indians were removed to Oklahoma in 1868, the area immediately was opened for settlement. Among those adventurers was Mr. Bailey, enticed to come to Osage County by his cousin, Judge Lawrence D. Bailey, who assisted in establishing Lyndon. Wells was born in Sodes, New York in 1827 and migrated to Iowa and Illinois before coming to Lyndon. He was a machinist, millwright and farmer most of his life. He and his wife, Julia, are buried at the Lyndon Cemetery.


The historic house was a timely acquisition by the Historical Preservation Partnership of Lyndon (formed in the initial stages after the discovery of the Bailey house) when a local teacher was inquiring whether there was a log cabin in the area. She was told there was one east of town and at first glance it appeared to be a two-story clapboard house, but upon closer examination one corner of the siding had been pulled away to expose the walnut logs and chinking.


The excitement at finding the log cabin was enhanced when the owners said they would give it to the city, and the timing was so fortunate because the owners were moving out of state the next day!


Along with the log house, the HPPL group will add to the park area a mini village - a reproduction of the first businesses in Lyndon when it was first established. Included will be a general store; a barber shop, a blacksmith shop and perhaps other buildings to enhance the village.


Come visit us in Lyndon, Kansas

The Lyndon Carnegie Library is believed to be one of the smallest Carnegie Libraries in the United States. Erected in 1910 from a grant of $7,500 from philanthropist, Andrew Carnegie, with the provision that the township agreed to maintain it at a cost of not less than $750 per annum.

When the Indians were removed to Oklahoma in 1868

The Lyndon Museum and Research Center offers an interesting collection of artifacts and records that give insights into the early days of the county and its citizens.

Lyndon's first school was located in the home on Madison Street shortly after Lyndon was founded in 1870. The house continued as a school until it was purchased by School District 28 in August, 1889 for $300. The school continued to own the property until October, 1907.

To Lyndon calendar of events

Things to do Famous Homes near Lyndon, KS