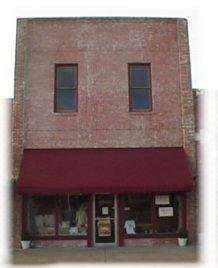 A prominent businessman purchased both of these buildings (Barbara's and Watonga Floral) in 1998 and started the renovation by removing aluminum siding and exterior paint from the brick. He then painted the transom windows and added awnings to restore the original appearance of both buildings.