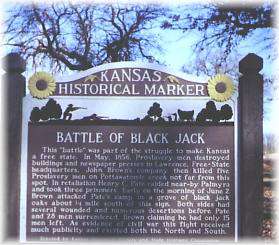 This battle was part of the struggle to make Kansas a free state. In May, 1856, Pro-slavery men destroyed buildings and newspaper presses in Lawrence, Free-State headquarters. John Brown's company then killed 5 Pro-slavery men on Pottawatomie Creek not far from this spot. In retaliation Henry C. Pate raided near-by Palmyra and took 3 prisoners. Early on the morning of June 2, Brown attacked Pate's camp in a grove of Black Jack Oaks about 1/4 miles south of this sign. Both sides had several wounded and numerous desertions before Pate and 28 men surrendered, Brown claiming he had only 15 men left. As evidence of civil war, this site received much publicity, and excited both the North and South.

The Park is open from dawn to dusk, year-round for self-guided tours. Guided Battlefield tours are given weekend afternoons at 1:00 from May through mid October.

Things to do Battlesites near Baldwin City, KS