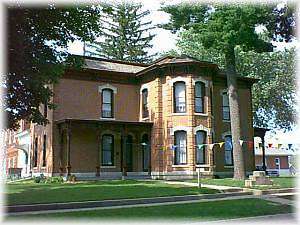 This Italiante-style house was built in 1881 and features an unusual decorative hardwood floor in the sitting room, classic furniture, painting by noted regional artist, Alice Cleaver, and details of political interest; such as, the coat and tails worn by Governor Arthur Weaver at his 1929 inauguration.

Originally it was the dream home of a thirty-one year old widower, George A. Bell, and his twenty-one year old fiancee, Kate Helfrich. After their marriage, they purchased land at the north edge of Falls city. The "Falls City News" of April 7, 1881, revealed that the Bells were building a two-story house, 26 feet by 40 feet, with eight rooms at the cost of $3,000. On December 31, 1881, the same paper announced that the house actually cost $4,000. Two months later, the Bells and Ethel, George's child by his first marriage, moved into their new dream-come-true house. By 1889, George's ambition outgrew Falls City; therefore, the family moved to Omaha where the businessman established a livestock commission firm, Bell, Shelly and McCoy.

Seven months later, Florence Jenne, the wife of W.W. Jenne, recorded the deed for the Harlan Street property. The Jenne family owned the house from 1889 to 1939 - longer than any other family.

When Richardson County Historical Society was organized in July, 1986, members decided to publish the fact that they needed a building. Two months later, Muriel I. Kreuger Morris, in memory of her late husband, Leonard G. Krueger, expressed her desire to donate the brick house. After an initial restoration period, members of the Richardson County Historical Society held a dedication service opened to the public on August 16, 1992.

Over a hundred years ago, the George A. Bells used their dreams, plans and money to build a home in a pioneer community. Today many people are generously working with the same incentives to provide an ideal place to preserve the past for future generations.