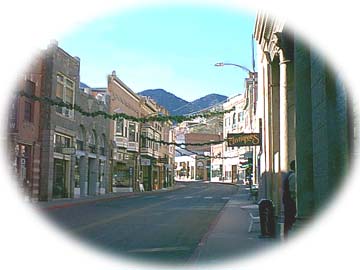 To stop in Bisbee is to stop in time. Nestled in the mile-high Mule Mountains of southern Arizona, Bisbee has maintained an Old World charm seldom found anywhere in the United States.

The fine collection of well-preserved turn of the century Victorian structures are full of old west history and copper mining lore. Old miners' boarding houses have been refurbished into many charming small bed and breakfast establishments, of which no two are alike.

Former saloons are now quaint shops, antique stores or art galleries, cafes and restaurants. Many travelers return year after year to relax and enjoy a quiet week in Old Bisbee re-discovering these many pleasures.

Bisbee, Arizona is the county seat of historic Cochise County. The community was founded in 1880 and named after Judge DeWitt Bisbee, a financial backer of the Copper Queen Mine.

This Old West mining camp proved to be one of the richest mineral sites in the world, producing nearly three million ounces of gold and more than eight billion pounds of copper, not to mention the silver, lead and zinc that came from these rich Mule Mountains. By the early 1900s, the Bisbee community was the largest city between St. Louis and San Francisco.

It had a population of 20,000 people and had become the most cultured city in the Southwest. Despite its culture, however, the rough edges of the mining camps could be found in notorious Brewery Gulch, with its saloons and shady ladies. In 1908 a fire ravaged most of Bisbee's commercial district along Main Street, leaving nothing but a pile of ashes.

Reconstruction began immediately and by 1910 most of the district had been rebuilt and remains completely intact today. Activities began to slow as the mines played out and the population began to shrink; mining operations on a large scale became unprofitable in 1975.

Bisbee has since evolved into an attractive artist colony and retirement community emphasizing monthly special events and tourism. Travelers from all over the world come to Bisbee to savor its unique charm ... an uncommon blend of creativity, friendliness, style, romance and adventure — all wrapped in the splendor of the Old West.

Come stay in Bisbee. Stroll its sidewalks and find delight in the many art galleries, gourmet restaurants, coffee houses, book stores and specialty shops. Visit the charmingly restored neighborhoods of Victorian and European-style homes perched miraculously on the hillsides. Unwind ... relax ... and find soothing respite from your everyday world.

This registered National Historic site was built by Joseph and Carmelita Muheim beginning in 1898 and completed in 1915. The home is an example of late 19

Southern Institute for Culture and Art

With a history deserving of National Landmark status, it's only fitting that Bisbee's past be captured and reflected in a museum like no other. Which is exactly why the Bisbee Mining & Historical Museum recently joined forces with the Smithsonian'

Operated by the Bisbee Restoration Association this free museum is housed in the Fair Store building located on Bisbee's historic Main Street. The museum contains numerous items connected with the community's early history of mining and ranching. A gift shop is located on the main floor.

To Bisbee calendar of events

Things to do near Bisbee, AZ

Located on a hill overlooking the beautiful San Pedro River valley near Benson, the Vega-Bray Observatory has eight major tel...

The Pine-Strawberry Museum in Pine, Arizona, was opened in 1979 for the purpose of displaying artifacts relative to the prehi...