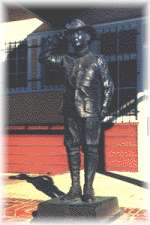 The first boy scout troop in America was organized in Pawhuska, Osage County, Oklahoma, in May, 1909, by Reverend John F. Mitchell, a missionary priest from England sent to St. Thomas Episcopal Church, by the Church of England. Rev. Mitchell, who had been associated in scout work with Lord Baden-Powell in England, organized the troop of Boy Scouts under English charter, and equipped them with English uniforms and manuals. A life-sized bronze statue stands as a monument in front of the Osage County Historical Museum to honor Reverend Mitchell and the 19 charter members who were organized under English charter.

Pawhuska's troop had the honor of being Troop No. 1 in the Boys Scouts of America, and has the certificate on exhibit in the Historical Museum in the Scout Room. When the Cherokee Area Council of Boy Scouts was formed in Bartlesville, Pawhuska was numbered Troop 33. This Troop No. 33 is a continuance of the original first Boy Scout troop in America.

Things to do Monuments near Pawhuska, OK