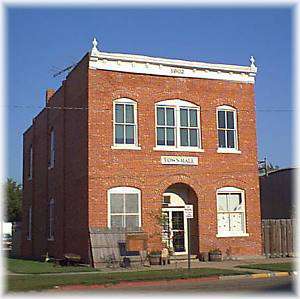 The Bradshaw Town Hall, a two-story brick
municipal building constructed in 1902-3, is a good
example of the town hall, a building type that became
common in many Nebraska communities in the early
twentieth century. The hall served as a public meeting
place for local civic and governmental activities. Listed on the National Register of Historic Places, it is
now a community center.