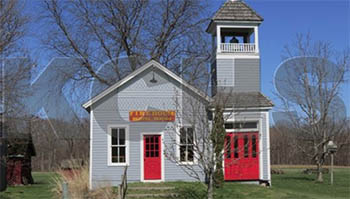 The village of Yorkville mentions a fire department in a note dated July 1877, directing 2 trustees to buy fire equipment. The fire house was built in 1888, 2 doors south of the library building on the east side of Bridge Street just south of Van Emmon Street. The village board soon began meeting in the building. The structure was moved in 1905 to the north side of Madison Street, across from the courthouse. Until a few years ago it was still used as the meeting place of the Yorkville city council.

The Lyon Farm is the pride and joy of the Kendall County Historical Society. In 1974, Mrs. Frances Lyon donated 39

Things to do Historic Buildings near Yorkville, IL

Old Stockade on the Cobblestone Street

See and hear of Galena's earliest Indian trader and how his building served Galena since the mid-1820s, through the Blackhawk...

Built in 1939, this building has been preserved, renovated and improved with modern handicapped restrooms, elevator, catering...

The Apollo is an all-purpose activity center, whose 1912 theater has recently been renovated. The 12,000 square foot space ca...

Built in 1896 and 100 years later, the Lena Water Tower was placed on the National Register of Historic Structures. Th...