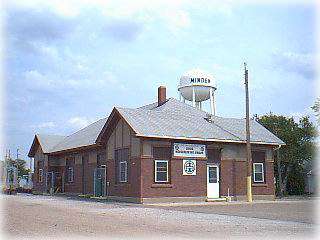 The Minden depot is a brick/stucco structure completed in 1913. The original frame depot was then used as a freight house placed to the west of the passenger depot. The engineering department of the old CB&Q, predecessor of BN, designed several floor plans during the period of 1910-1920 when many of the modern brick structures were erected.

Things to do Railroad History near Minden, NE