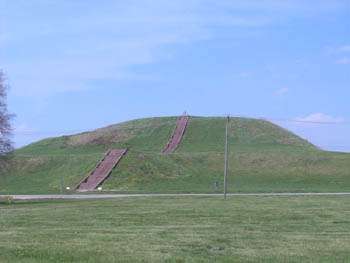 This world heritage site, a National Historic Landmark, marks the location of an ancient natural American Indian city, perhaps the largest such community in what is now the United States. A 33,000 square foot interpretive center recreates scenes of the past Indian civilization.

Monk's Mound is the central focus of this great ceremonial center. A massive structure with four terraces, it is the largest man-made earthen mound in North America. Facing south, it stands about 100 feet (30.5 m) high with a base 1,037 feet long and 790 feet wide (316 by 241 m). The Travel Channel has referred to it as the "world's largest pyramid."

Excavation on the top of Monk's Mound has revealed evidence of a large building — perhaps a temple or the residence of the paramount chief — that could be seen throughout the city. This building was about 105 feet long and 48 feet wide, and stood about 50 feet high.

"Woodhenge," a circle of posts used to make astronomical sightings, stood to the west of Monk's Mound. The name is taken from Stonehenge, as this structure marked solstices, equinoxes and other astronomical cycles. Archaeologists discovered Woodhenge during excavation of the site. They found that the structure was rebuilt several times during the urban center's roughly 300-year history.

A 50-acre (200,000 m²) plaza spread out to the south of Monk's Mound. The flat, open terrain in this area was originally thought to reflect Cahokia's location on the Mississippi's alluvial flood plain, but soil studies showed that the landscape was originally undulating and had been expertly levelled by the city's inhabitants. That means that Cahokia can boast the largest man-made earthen plaza in the world to this day.

A wooden stockade with a series of watchtowers at regular intervals formed a two-mile long enclosure around Monk's Mound and the great plaza. Archaeologists found evidence of the stockade during excavation of the area, and indications that it was rebuilt several times. The stockade seems to have separated Cahokia's main ceremonial precinct from other parts of the city.

Beyond Monk's Mound, as many as 120 more mounds stood at varying distances from the city center. To date, 109 mounds have been located, 68 of which are in the park area. The mounds are divided into several different types — platform, conical, ridge-top, etc. — each of which may have had its own function. In general terms, the city seems to have been laid out in a diamond-shaped pattern approximately a mile (1.609 km) from end to end.

Come visit us in Collinsville, Illinois

This 170-foot-tall bottle that resembles a Brook's Catsup Bottle served as a water tower for the catsup manufacturer after being constructed in 1949. This example of roadside architecture at its best was restored in 1995

Collinsville, IL One Of A Kinds

This world heritage site, a National Historic Landmark, marks the location of an ancient natural American Indian city, perhaps the largest such community in what is now the United States. A 33,000 square foot interpretive center recreates scenes of the past Indian civilization. Monk'

Bring the kids for a day playing on the 18

The family waterpark is a 12-acre attraction operated by the Collinsville Recreation District. It is a water wonderland for the young at heart with 5

We currently do not have any events for Collinsville, Illinois in our database. If you know of events taking place, please add the event
.

Things to do Archaeology near Collinsville, IL