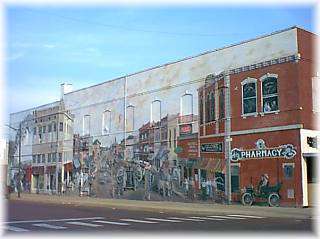 The Campbell Bros. Circus and other highlights of historic Fairbury are captured on this mural
on the side of Globe Rexall Drugstore in downtown Fairbury.

The picture was created by Echo & Jeff Easton & Greg Holdren. The scene is 140 feet long &
38 feet tall. Although the circus parade is the focus, the Easton's used historic pictures of
Fairbury to make the mural more accurate. Campbell Bros. Circus stationed their home in
Fairbury. From 1885 to 1913, the circus always opened their season in Fairbury but traveled
nation-wide. The Campbell Bros. Circus was held at the original fairgrounds which was in the
City Park. Campbell Bros. was the second largest circus in the world at one time.

Things to do Arts near Fairbury, NE