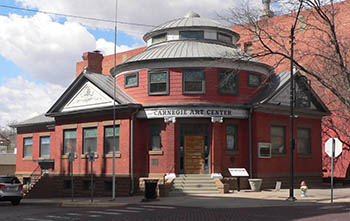 Listed on the National Register of Historic Sites, the center features a variety of art exhibits. The building is a former Carnegie Library constructed in 1907. Rounded architectural features create one of the more unique of Carnegies's libraries. Featuring a round, second-story gallery, this unique home to the Dodge City Arts Council provides gallery space and a small gift shop for local artisans.

We are operated by Volunteers, sometimes we can not be open because no-one is available. We are truly sorry for any inconvenience this may cause you.

Things to do Arts near Dodge City, KS