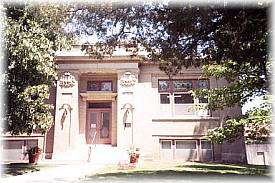 Steel magnate Andrew Carnegie gave millions of dollars to establish libraries across America in the early 1900s. The women's study clubs of Peabody were determined to bring a Carnegie Library to Marion County - they were joined by civic leaders and county commissioners and obtained $10,000.00 to build the 1914 Township library.

The Carnegie Library has touches of Frank Lloyd Wright Neo-Classical architecture with a multiple moulded, dentilled, limestone cornice, and boosts beautiful stained glass windows, marble tile entry way, heavy oak ceiling beams and elegant stone carvings on the front of the building. It is listed on the National Register of Historic Places.

The Ann Potter Memorial room in the basement with its adjacent kitchen is in great demand for groups and is often used by the Historical Society due to its central location.

Things to do Carnegie Libraries near Peabody, KS