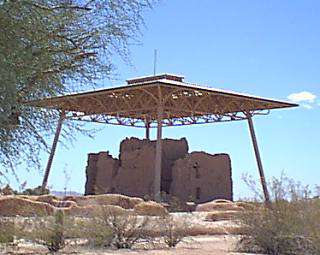 There are restrooms, drinking fountains, and picnic tables in the park. Food service, public phones, stores. and fuel are available nearby in Coolidge.

Admission: The entrance fee is $3.00 per person. Children 16 and under are admitted free.
Hours: Open daily except Christmas 8:00-5:00.
Address: Located an hour SE of Phoenix. From Interstate 10, take the Coolidge exits and follow the signs to the park entrance at Arizona Routes 87 and 287.
Phone: 520-723-3172
Our Website:www.nps.gov/cagr/


Come visit us in Coolidge, Arizona

To Coolidge calendar of events

Things to do Archaeology near Coolidge, AZ