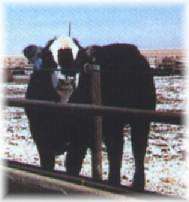 Things to do Agriculture near Scott City, KS

The Gardiner Angus Ranch is associated with several major agricultural colleges such as K- State, West Texas University and m...