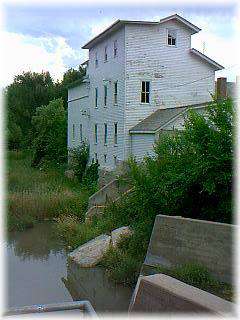 The last functional water-powered mill in Nebraska, this two-story structure stands as a symbol of the settlement and development of Nebraska and the West. Champion Mill ground flour and grain from 1888-1968, and visitors can still see the mill work in progress as whole grain is brought in and passed along conveyor belts to grinders and sifters, and finally bagged as flour to be used for baking. Visitors can even purchase a souvenir bag for themselves.

Purchased by the Nebraska Game and Parks Commission in 1969, the commission preserved the mill as a state historical park as an example of late 19th and early 20th century industrial milling. The old mill pond that reserved water to be directed through the mill gates to turn the huge drive shaft, still provides water power and recreation opportunities just as it has since 1888.

Started in 1888 by Thomas Scott, the mill changed hands many times. Little is known of the 1888 mill itself, but a 36-inch Leffel water turbine was installed on the dam, and power was transferred through a geared iron shaft to the mill. From the start, Scott used steel rollers instead of the burr stones common in milling until the invention of the gradual reduction roller process in the late 1870s. Using sifting and regrinding undoubtedly gave the mill an edge in an evolving industry. By offering a better quality flour, it did a brisk business. The original mill structure was destroyed by fire early in 1892. Scott rebuilt the mill which is the present two-story, 25 foot by 32 foot main building with a stone foundation, and more sophisticated machinery than earlier Nebraska mills. Scott sold it the next year, and until its closing and purchase by the Parks Commission the mill changed ownership seven times.

Mill ponds have always provided recreation, and Champion is no exception. Picnics, boating, fishing, swimming, ice skating and other activities have been popular here since the beginning, serving as a recreational hub for southwest Nebraska. In the 1920s, the owners actively promoted recreation at Champion Lake. The built a diving board, 20-foot tower, along with the bathhouse, where swimmers could rent a suit for a dime. A few canoes and rowboats could be rented, and eventually motorboat rides were offered at 25 cents per person.

FISHING - Champion Lake has always been known as a beautiful body of clear sparling water abounding with trout and other fish.


Admission: A State Park Entry Permit is required for the rec area and historical park.
Address: S-15A at Champion, 7 miles southwest of Imperial.
Phone: 308-882-5860
HOURS: The grounds are open 8 a.m. to 8 p.m. during the summer season and 9 a.m. to sunset the rest of the year. Interpretive facilities are open daily Memorial Day weekend to Labor Day, 9 a.m. to 5 p.m. and May, September, and October weekends, Saturday, 9 a.m. to 5 p.m., and Sunday 1 to 5 p.m. Other times by Appointment.

Come visit us in Imperial, Nebraska

Things to do State Parks near Imperial, NE