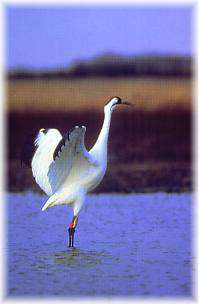 Cheyenne Bottoms and nearby Quivira National Wildlife Area are also half-way down the central flyaway for migrating birds. Out of more than 200 stopover areas, Cheyenne Bottoms attracts 45 percent of North American Shorebirds. Both refuges host myriads of ducks and thousands of sandhill cranes on the way to their staging area along the Platte River in Nebraska.

FREE PERMITS REQUIRED - When the check station is in operation, hunters must obtain a permit to use one of the 167 concrete duck blinds or the goose hunting zones. Permits are obtained at the area office check station free of charge on a first-come, first-served basis. When a blind or zone is assigned, hunters are required to leave their hunting license at the check station. Hunters must return to the check station within one hour after the end of their hunt or within one hour after sunset, whichever occurs first. At this time, any game bagged is inspected and the hunter's licenses are returned. All hunters must obtain a hunting survey permit at any of the wildlife area parking lots or one of the four main entrances. Permit dispenser and deposit boxes are at these locations Hunters need only follow instructions provided.

Pools 1, 5, and a portion of Pool 2 are refuge areas and closed to all activities. Exceptions to this occur for some special hunts. Check with wildlife area personnel for more information.

OTHER GAME - In addition to waterfowl, other game may be legally taken at Cheyenne Bottoms. Pheasant hunting is usually good. Snipe and rail hunting is good along the shallow marsh margins. Quail and deer are also present in fair numbers.

A handicapped accessible hunting/photo blind is available by reservation. Call the office for additional information and reservations.

In the event of whooping crane activity, the pool the birds are in is closed to all hunting and the goose hunting zones are closed to crane and light goose hunting.

CAMPING - Camping is permitted only in the primitive campground located 1 mile west of the area office.

Tucked in Brit Spaugh Park on North Main, the Zoo is great Bend's little jewel. Dedicated to the conservation, preservation and rescue of animals and the education and entertainment of both children and adults, the Zoo is a natural resource for Great Bend and its visitors.

Every year visitors from all over the Midwest hit the trail to Great Bend. Our holiday light displays are among the best in the nation. In fact, the trail is a recipient of the American Bus Association's Top 100 Events in North America for the year 2000

The Crest Theater, a former movie theater in downtown Great Bend, is listed on the National Register of Historic Places and has been renovated for use as a live performing arts facility. In addition to four community theater productions a year, the 618 seat theater'

To Great Bend calendar of events

Things to do Wildlife Refuges near Great Bend, KS