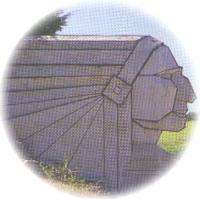 Born June 30, 1856, near the headwaters of the Arkansas River, Henry Roman Nose was reared in the nomadic environment of buffalo hunting and tipi dwelling. In 1868, his tribe was forced to give up their nomadic ways and locate in what is now western Oklahoma.

Roman Nose's camp was located in the large canyon which later would become part of Roman Nose State Park. The canyon was an ideal camp site since its high walls protected the Indian lodges from the cold winter winds. The canyon also had plenty of good running water near the grass country of the buffalo.

Despite constant cavalry patrols of the area, conducted by the infamous George Armstrong Custer and the Seventh Calvary Unit, the Cheyenne continued their raids on the white settlements. In 1875, as a result of these raids, several Cheyenne chiefs and warriors were imprisoned and shipped to St. Augustine, Florida. One of these Chiefs was Henry Roman Nose.

After three years of imprisonment, several captives were sent to Hampton Institute in Virginia. Roman Nose was one of these few fortunate captives. Later he went to Carlisle Institute in Pennsylvania, and in 1881, returned home, fully qualified as a tinsmith. The next years were full of change for Roman Nose. He married Red Paint Woman, who soon died. His tinsmithing abilities proved to be unproductive in a land where the Indian had little use for his skills and the white man would not do business with Indians. For the next four years he worked as a scout for the cavlary and as policeman for the Indian Agency. In June 1891, he received his allotment and began using his education by trying to preserve parts of the Indian way of life. In 1889, he became chief of the Cheyenne, serving until his death in 1917.

Roman Nose's life spanned the most turbulent times for Cheyenne people. He can be remembered as a great peacemaker who helped his people make the transition from a nomadic lifestyle to the settled existence of the whites.

Things to do Famous People near Watonga, OK