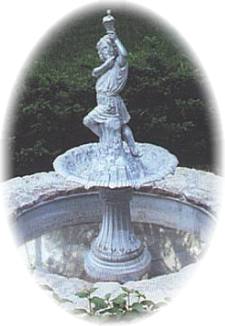 Take a stroll back in time along the streets of Peabody. Imagine yourself in a different age...when towns like this were new adventures on the prairie... when new arrivals from Europe and the eastern states spilled off the railroad trains... when folks drove their horse-drawn wagons to town and crowded the streets to shop, trade, and visit with their neighbors.

A walk down Peabody's historic main street - named Walnut Street - is like a visit to the past. Stores offering unique gifts, anatiques, food and more can be found in the friendly atmosphere that envelopes this small town.

Forty-two of the 46 buildings on Walnut Street are part of the historic downtown area. The Morgan House, Peabody Township Library and Peabody Historical Museum are all listed on the National Register of Historic Places.

Peabody has also been recently included, along with 44 other communities across the country, in the national Main Street publication "Main Street Success Stories." The 1997 Travel Guide featured Peabody as one of the "six irresistible places to visit" within Kansas. Over the past 10 years, Peabody has recieved much television, radio and magazine recognition.

Peabody's first settlement was originally called Coneburg, and was developed in the autumn of 1870. In 1871, the main line of the Atchison, Topeka and Santa Fe Railroad had reached the site. As an honor to F.H. Peabody, vice president of the Santa Fe, the new town was named for him. In 1874, he presented a library building, furniture and a collection of 2,000 books to the new settlement, for free public use, "to all citizens of good moral standing."

Kansas has great numbers of Mennonites, and the first large contingent of members of that faith settled in the Hillsboro area in 1874, and came to Peabody by train, then moved on to their land. Leaders of the group had previously inspected the large tracts of property and arranged for settlement. The group arrived here May 30, 1874, and began moving out to their land the following day. There is an interesting story that when the Mennonites left Peabody and went out into the open prairie, they plowed a furrow for many miles to mark their trail and guide them back to town.

The Mennonites were mostly of Dutch and German origin but came here from Russia. Some of the Germans spelled the name of Peabody as "Pibude". The new Mennonite settlement also was referred to as Brudenthal, "Valley of the Brothers" as new arrivals came an gave brotherly aid to the new community. According to another interpretation, Brudenthal was named for three brothers "whose farms joined the place".