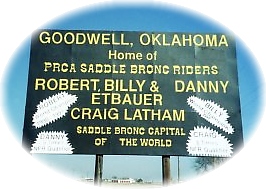 Goodwell, located in the heart of historic No Man's Land, officially became a town on June 16, 1903, when the post office was established. The Rock Island railroad was responsible for creating Goodwell along with many other communities along the railroad. Goodwell was named by railroad workers who were fond of the good soft water which came from the well they had drilled on the town site. Goodwell was later incorporated on January 2, 1917.

Good water is not the only reason Goodwell receives recognition.

Well-known nationwide and representing not only Goodwell, but also Texas County are:

An excellent 9-hole, par-three golf course and a fitness center at the university are available for public use.

To Goodwell calendar of events

Things to do near Goodwell, OK

The North Central Oklahoma Cactus Botanical Garden has 1500-plus varieties of exotic cacti and succulents in 2 locations; gif...