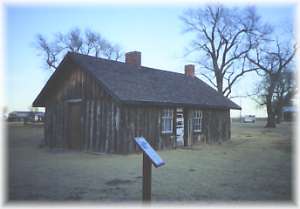 The Teamster's Cabin is a rare example of a common frontier building. In the early 1880s, cedar logs were placed vertically in a trench to form the walls of this two-room cabin. The space between the logs was chinked with scraps of wood and daubed with mud or mortar to keep out the weather. It has been altered.

The cabin was built as a residence for civilian employees of the U.S. Army's Quartermaster Department. It was located south of the QMD corrals and next to the teamster's mess and dormitory buildings. The teamsters drove the mules and oxen that pulled freight wagons to supply the region's forts and Indian agencies.

The cabin may have served as a residence for Amos Chapman, the post's famous scout and interpreter, and his Cheyenne wife, Mary Long Neck, and their family. Amos lost a leg at the Battle of Buffalo Wallow in 1874. He was awarded the Congressional Medal of Honor.