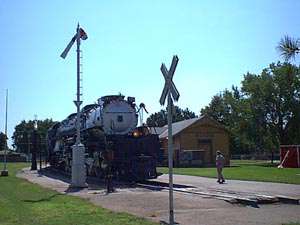 One of the most beautiful sights in North Platte is Cody Park. The Union Pacific Railroad Co. donated and installed steam locomotive UP 3977 in the railroad museum area of Cody Park in 1968. This locomotive, after being removed from service at the end of the steam era, was used in snow meter service for a short period. It was then stored in North Platte until 1968 when a group of citizens approached U.P. and requested it be moved to the park display.


Accompanying the 3977 Unit is a baggage car (also acquired in 1968), mail car, caboose, orderboard water crane, baggage truck, and semaphore block signal. In 1985, Unit 6922 was retired and donated to the City of
North Platte by the Union Pacific Railroad. It was installed in the park in August of the same year. Also on display is the railroad Depot from Hershey, Nebraska. The Depot houses such memorabilia as a dispatchers telephone, operators telephone, telegraph equipment, as well as the appropriate depot furniture.


During the night, visitors can drive by and observe working headlights, running lights, and marker lights of the locomotives as well as block signals and depot platform lights.


Admission: Free of Charge
Hours: Season/Hours of Operation May 1 - End of September, Every Day, 10a.m.-8p.m.

Things to do Museums near North Platte, NE