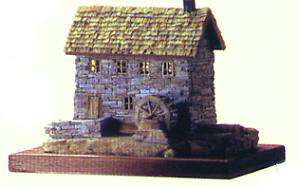 Kenfield Brothers Petrified Wood Gallery is a museum of natural history specializing in ancient woods. The gallery contains a selection of gems and minerals as well as arrowheads and Indian artifacts collected over forty years by twin brothers Harvey and
Howard Kenfield.

A gallery highlight is the prize-winning collection of three-dimensional petrified wood pictures of ghost towns and houses and barns reminiscent of the Great Depression era of the 1930s. The collection has won prizes at gem and mineral shows throughout the nation. at one event in St. Louis, Missouri, the exhibit won both top awards, one judged by the general public and the other by exhibitors - the first time in the history of the show that both awards went to the same exhibit.

Also popular with gallery visitors are pictures of birds made with naturally colored pieces of petrified wood. There are baby robins, chickadee, woodpeckers, owls and eagles.

Visitors will find a unique collection of lapidary art, including beautifully polished rounds of wood, limbs, agates, spheres, and carving artistically displayed. There are also fossil cones and fossilized leaf imprints, as well as Native American artifacts, which were formed within a 25-mile radius of Ogallala, mostly in the Lake McConaughy area.

There is also a rock which bends and a gemstone map of the United States.


Admission: A free will donation is accepted for admission.
Hours: Year round hours are 9 a.m. to 7 p.m. Monday through Saturday 1 p.m. to 5 p.m. Sunday.
Appointments and Groups Welcomed
Address: Front Street on East Highway 30
Phone: 308-284-9996

Things to do Museums near Ogallala, NE