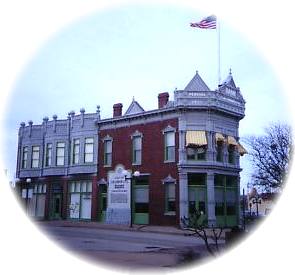 As early as 1803 the present site of Coffeyville was occupied by the Black Dog band of Osage Indians who crossed back and forth to the west plains to hunt buffalo. In the early 1880\'s, Coffeyville was known as Cow Town due to the numbers of cattle grazing the open range and fact that it was a shipping point for cattle herds.

Coffeyville was settled in 1869 and originally was an Indian trading post. Colonel James A. Coffey relocated here from Humboldt, Kansas, to what is now South Walnut and established a trading post to trade such things as lumber, building materials and other supplies with the Indians.

In 1871 the Leavenworth, Lawrence and Galveston Railroad selected Coffeyville to be terminal city because of all the grain trading and cattle shipping that could be done.

In 1884, Coffeyville became the most important grain station in the state except for Kansas City.

By 1890, Coffeyville citizens were becoming aware of their natural resources: fertile soils, sufficient water to supply many factories, large deposits of shale suitable for brick and tile plants, and large quantities of limestone and building stone. Also in 1890, Coffeyville was first in Kansas to discover and develop gas, a valuable fuel.

One of the most significant aspects of Coffeyville\'s past was the raid on Coffeyville by the Dalton Gang on October 5, 1892. Five men, three Dalton brothers in disguise, Bob, Grat and Emmett, Bill Power and Dick Broadwell had a plan to rob two Coffeyville Banks, the First National Bank and the Condon Bank. Following the robbery a 12-minute gun battle ensued which left four of the Dalton Gang dead--Bob, Grat, Broadwell and Power and four of Coffeyville\'s citizens also lost their lives--Lucius Baldwin, Charles Brown, George Cubine and Charles Connelly. Emmett survived.

Walk the same path taken by the Daltons in 1892

The Dalton Defenders Museum houses memorabilia from the infamous Dalton Raid in 1892. Guns, saddles and the original First National Bank doors can all be seen, plus many pictures taken following the raid.

The Dalton Gang, which had been terrorizing the Indian Territory with its daring train robberies, set out in early October of 1892 from their hideout near Tulsa in an attempt to make outlaw history. It was Bob Dalton'

You will take a step back in time to the elegant lifestyle of the early 1900's when you visit the Brown Mansion listed on the National Register of Historic Places. Completed in 1907 by W. P. Brown, the four-floor, 16 room Mansion contains the original furniture, wall and floor coverings.

We currently do not have any events for Coffeyville, Kansas in our database. If you know of events taking place, please add the event
.

Things to do near Coffeyville, KS

The third largest producer of packaged ice with tours available by appointment....