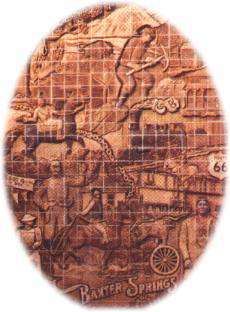 Take the self-guided Civil War tour of Baxter Springs. Visit 12 points of interest relating to the attack on Ft. Blair and the subsequent Battle of Baxter Springs. For example, SITE #2 - Quantrill divided his troops into three groups for the attack. One group, under Pond, moved up the hill to come in for the attack from the south. Another group under Gregg moved through the ravine to the right to attack the fort from the east. Quantrill himself took another group toward the north to circle in and attack from the north.

Maps and brochures may be picked up at the Historical Museum, the Chamber of Commerce, Cowtown Flea Market, or downtown restaurants.

* Rainbow Curve Bridge just north of town is the only remaining Marsh Arch bridge on Rt. 66. * The InterUrban Street Car Bridge spans the lazy banks of the Spring River.

Things to do Tours near Baxter Springs, KS