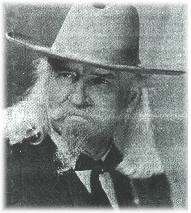 When Col. William Newton Kinslow died in Beloit on Oct. 18, 1948, many attended his funeral, but no one bought him a head stone to mark his final resting place.

At 6'7", Kinslow was a member of the National Society of Longfellows and at one time was listed as the second tallest man in Kansas.

Kinslow was always seen wearing a 20 gallon hat and carrying a cone. His long white hair, and long mustache and white goatee gave him an appearance oddly similar to his friend Col. William "Buffalo Bill" Cody and he used that appearance to travel throughout the country portraying Cody in Wild West shows. He was also a commanding presence on the big screen, appearing in such movies as "Dodge City", "Wells Fargo" and Gay "Nineteen".

And, to some extent, Kinslow has never been forgotten. A picture of him still hangs in the halls of Mitchell County Historical Museum, and he was featured in the publication "Historical Moments in Mitchell County," compiled by the WCKAA and published in 1976.

The one true remembrance of Col. Kinslow that eludes him to this day is a headstone. Though one can go back and find out that his funeral was held at the Vail McDonald Funeral Home and that he was buried in Elmwood Cemetery, one would not find exactly where without knowing the name of wife, Jesse Irene Crowell, who does have a headstone and whom he was buried next to.

Things to do Pioneer Life near Beloit, KS