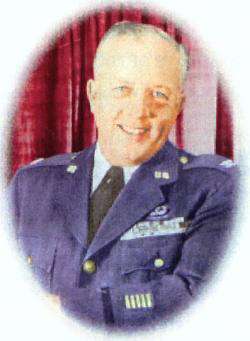 Colonel Barney Oldfield was born in Tecumseh, Nebraska on December 18, 1909, and graduated from Elk Creek High School in 1928. He attended the University of Nebraska and studied Journalism which led him to employment at the Lincoln Journal and Star and also as a regular weekly disc jockey on KFOR Radio where he talked about Hollywood. As a University student he joined the ROTC - and in November 1940 was called into active duty as events were leading up to World War II.

His military career spanned a little over 30 years and found him working close to Dwight Eisenhower, as well as Jim Gavin and Lauris Norstad, who were both outstanding military generals. He retired from the U.S. Air Force in 1962 with the distinction of being a colonel in both the Army and Air Force. In fact, Oldfield received decoration for rank and colonel three times. While military figures traditionally must be deceased before having something named in their honor, Lt. Col. M.S. Azzolina wrote a Colonel Barney Oldfield March. Former Canadian broadcasting corporate music director, Howard Cable, published the march in 50 parts for band by E.B. Marks music, and it premiered at Carnegie Hall.

In addition to his military work, Colonel Oldfield worked on every continent in more than 81 countries in many modes, including newspaper man, radio and TV script writer, magazine contributor, lecturer, author, teacher, "ghostwriter" for famous personages, Hollywood publicist and businessman.

After his retirement from the military, he went to work for Litton Industries as Corporate Director of Special Missions and Projects for 27 years retiring when he was 80 years old. While working for Litton he visited Russia several times and was involved in several of the space projects. He produced the Public Service Series - Face to the Future, Great Moments in Music, and If We Want To. These were sent to radio stations as public service material. He is called the Father of the NORAD Band composed of Army, Navy, Air Force, and Royal Canadian Air Force members. He was also instrumental in introducing tracking Santa Claus from the North Pole which can be heard each Christmas on radio and television stations.

In 1997, six miles of U.S. Highway 136 from Tecumseh east to the Johnson County line, was named the Colonel Barney Oldfield Memorial Highway. Also that year, he was inducted into the Nebraska Press Association Hall of Fame and his uniform was enshrined in the Celebrities in Uniform section of the Air Force Museum in Dayton, Ohio. The "Believe It or Not" - The Life and Times of Vada and Col. Barney Oldfield Exhibit is on display in Tecumseh, Nebraska and is an educational, informative, and enjoyable experience.

Colonel Oldfield resided in Beverly Hills, California for many years. He passed away on April 27, 2003 at Cedar Sinai Hospital in Los Angeles, California.

Things to do Famous People near Tecumseh, NE